In October 2016, we launched this new stamp series. The aim is to uncover a part of history, which has not yet been depicted on stamps: Greenland during the Second World War from the perspective of the Greenlandic people.

The series comprises a total of ten stamps in combined offset and laser engraving. It will finish in 2020, when we celebrate 75th anniversary of the end of the Second World War. On 23rd January 2017, the series will be continued with this stamp, which deals with cryolite the mineral that is used for aluminium production. 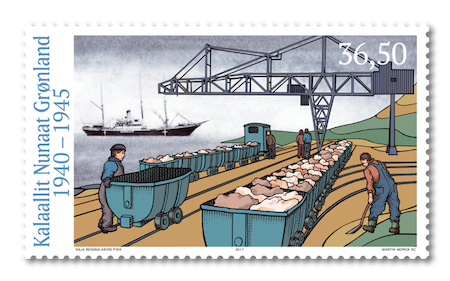 When Denmark was occupied by Hitler's Germany on 9th April 1940, Greenland became isolated from Denmark. During the rest of the world war, until 1945, the Greenlandic people were therefore supplied with commodities from the US and Canada, and they paid for the products by means of cod fishing and by selling cryolite.

All stamps in this series contain photos from the wartime. Parts of the stamps are therefore photographic reproductions from that time, whereas the parts drawn by hand are the artist's own expressions. The artist behind the images is Naja Rosing-Asvid, who among other things created the series "Greenlandic architecture". The legendary Martin Morck is the man behind the engraving of all ten stamps.

Naja says the following about this fourth stamp in the series:
"The cryolite mine in Ivigtut played a very important part in Greenland's economy during the war, and it has therefore been chosen to be one of the ten images in the series, which reflects the war from the perspective of the Greenlandic people.

The Greenlanders did not work in the mine themselves, but there were some locals among the crew members onboard the ships that sailed the cryolite to the US. I have chosen the ship "Hans Egede" as a background photo, as it was one of the ships that carried commodities from the US to Greenland and returned with cryolite to the American war industry. During a voyage to the US in 1942, the "Hans Egede" was torpedoed by a German submarine, and everyone on board died. Three Greenlanders died in the tragic incident".

By Pertti Frandsen, Development Manager
During the entire Second World War, large parts of Greenland's economy were, as mentioned, based on the sale of cryolite. The mineral, which is relatively scarce, was mined in Ivigtut (Ivittuut) located by the Arsuk Fjord in South Greenland. The mine had been opened back in 1856. In 1940, it was operated by the company "Kryolitselskabet Øresund A/S". The Danish state owned half of the share capital and received a certain share of the company's profits.

The cryolite was especially used as a flux in aluminium production, thereby hardening the metal, which among other things was used for the production of warplanes. Since the 1920s, cryolite from Ivigtut had been essential to American plane production. Before the war, approximately 40,000 tonnes of cryolite were exported on an annual basis, and the US imported almost 14,000 of these tonnes. During the winter of 1939-40, a total of 102 blue-collar workers and 12 white-collar workers were employed at the mine. Furthermore, 25 "summer workers" came to the mine in the spring of 1940 in order to provide shipping assistance.

Before the war, the mine and the rest of Greenland were almost cut off from each other. This was due to the mindset of the 1920s regarding the mine and its economy: since no Greenlanders worked there, the mine was not regarded as having anything to do with the running of the rest of Greenland. This changed when Denmark was occupied.
The company "Kryolitselskabet Øresund" was suddenly prevented from continuing the operation of the mine. On 12th April 1940, England occupied the Faroe Islands, much to the relief of the Faroese. The two governors in Greenland, Aksel Svane and Eske Brun, therefore considered applying for help from the US in order to protect the cryolite mine in Ivigtut.

When "Aluminum Company of Canada" several times questioned the governors' rights and powers in relation to the mine, Denmark's envoy to Washington, Henrik von Kauffmann, therefore encouraged the governors to formalise the takeover. This was then announced on 3rd June 1940 with the governors exercising Greenlandic government control.

During the beginning of Denmark's occupation period, the mine was actually unprotected. A potential attack could therefore easily render the mine out of operation, whereby Greenland would loose its economic foundation, and the allied would loose an important resource. Svane was, however, more inclined to express his fear of sabotage, and in order to be able to protect the mine against potential Nazi sympathisers among the workers, Brun had wanted a military ship to be stationed opposite the mine.

Canada wanted to station guards by the mine if the authorities in Greenland could not handle the task. Due to the situation, the U.S. State Department agreed to sell a machine gun to the governors already in May 1940. After some delay, the machine gun was set up by the mouth of the fjord, and a motor boat was provided in order to make it possible to patrol the waters around the mine. Thirteen security guards, who were former U.S. Coast Guardsmen, were recruited in the US and assigned to the governors.

During the winter of 1940-41, Eske Brun stayed by the mine. Brun's stay emphasises the part played by the mine in relation to both the administration in Greenland and, among others, the US. After the US entered the war in December 1941, the American military took over the protection of the mine, and the former guards were sent home. The mine was not attacked or sabotaged during the war.

The American company "Pennsylvania Salt Mfg. Co." and its Canadian counterpart "Aluminum Company of Canada" sometimes employed observers by the mine. These were used in order to ensure that the capacity of the mine was maximised. In a telegram from September 1941, it appeared that there was political pressure from the US to increase the production: "The cryolite situation is now highly serious, and the political pressure, that we have anticipated, has now become a present factor, which may result in very seroius consequences, if we do not take strong action, without delay, to increase the production to its utmost maximum." It also appears from the telegram that the Canadians wanted 25,000 tonnes, whereas the American "Pennsalt" wanted 35,000 tonnes or more. During the first years of the war, the production manager, Oscar Corp, managed to double the production, and thus the production figure peaked in 1942 with approximately 85,000 tonnes. During the following years, the production decreased, so that the average production figure for 1940-44 was approximately 50,000 tonnes a year.

In the beginning of the winter of 1941-42, envoy Kauffmann entered the board of directors as chairman in order to be able to appeal to the workers' patriotic feelings, if necessary, by means of his authority. During cryolite negotiations in 1942, Kauffmann managed to get a far better price for the cryolite than the price negotiated and obtained in 1940. Greenland's cryolite contributed to the implementation of the American and Canadian rearmament programme for their air forces during the Second World War.

The stamp can be purchased directly at POST Greenland.

About the artist:
Naja Rosing-Asvid is a trained architect, and has for the last 10 years worked as an artist, exhibition designer, a writer of chilrdren's books, a scenographer, and much more. She uses different forms of expression in her art, and she experiments, among other things, with pieces of wate and natural elements. Some of her work can be seen on her homepage www.najarosingasvid.dk.