The first ever postage stamps in the world were introduced in May 1840, the Penny Black. This may essentially be what you call a glimpse of postage stamps history. You may be curious -- how did people send and receive mail before this time period, and what made them think of using postage stamps instead?

Since the 1840s, postage stamps have assisted in the delivery of letters and mail. Before the existence of postage stamps, ink and hand-stamps (thus the word -- stamp) which were made from cork or wood were used. The ink and hand-stamps were used to frank the mail and verify the payment of postage. Regardless of how primitive or elaborate the different systems of sending messages in the early days were, they were sent without the presence of a postage stamp.

When the postal service first operated, envelopes and stamps did not exist yet. Truth is, people do not like to use envelopes because they were deemed as an extra sheet of paper that actually makes the overall cost of sending mail more expensive. If you are going to send a letter, you only have to fold the paper and seal it shut. Then, the person who will receive your letter will be the one to pay for the delivery fees. Because the fees back then were extremely high, a lot of people tend to decline accepting letters. Some people even thought of writing secret codes to cheat the postal services. On the outside of the letter, they would write secret marks that shows the message and all the recipient had to do was read the secret message, decline to accept the letter, and so they do not have to pay anything for it. Because of this, postal services have resorted to a system wherein postage has to be paid first, and this time, the sender would be the one to pay for all postage fees -- thus the start of our postage stamps history. 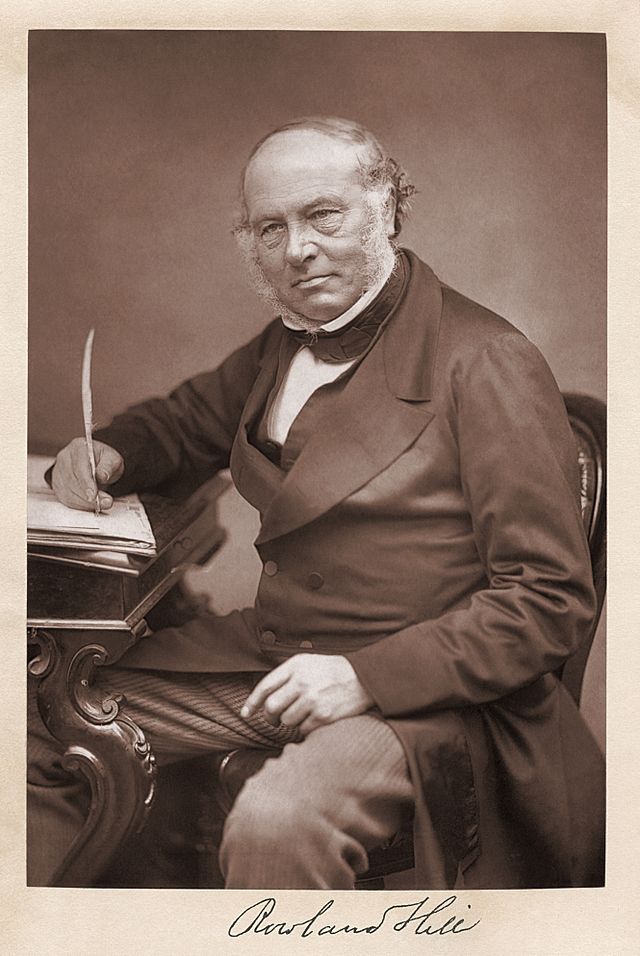 In 1835, Rowland Hill (an English teacher, inventor and social reformer) campaigned for a widespread postal office reform. His advocacy paved the way for the approval of the Uniform Penny Post -- postage rates were based on weight rather than the size of the mail. In 1837, Rowland Hill invented the first adhesive postage stamp -- the beginning of postage stamps history -- in which he was knighted for it. The Penny Black, the ultimate piece in postage stamps history, was issued in 1840 in England. The issuance of postage stamps made the pre-payment of letters and mail possible, practical, and cheap.

The First Use of the Postage Stamps

The first postage stamp in history, the Penny Black, became available to the public on May 1, 1840 and it was validated as of May 6, 1840. After 2 days, May 8, 1840, the Two Penny Blue was released. These two stamps show an engraved visage of Queen Victoria. Both stamps do not have perforations, because the first stamps at that time were separated from their sheets by cutting devices (probably scissors). Click here to view the Penny Black and the Two Penny Blue.

Ever since the first issues of postage stamps were released, there was no need to include the name of the country on the postage stamps. In fact, the United Kingdom is the only country that does not have its name printed on its postage stamps -- an FYI for your postage stamps history -- and they use the currently reigning royalty's head as their straightforward means of identification.

After the introduction of the postage stamps in the United Kingdom, the use of prepaid postage system had radically sped up the number of letters and other paraphernalia being sent. Before 1839, it was estimated that the number of letters sent that time was 76 million. During 1850, it increased five times to about 350 million, and it continued to grow substantially afterwards, up until the end of the 20th century when more modern methods of implying postage-paid considerably lowered the use of delivery systems that require the presence of postage stamps.

The Rise of the Stamp Collectors

The existence of stamps has triggered the rise of stamp collectors and the postage stamps of every country became highly collectible. Shortly after the introduction of adhesive postage stamps in 1840, people began to collect them. Little did they know that their newfound passion for collecting stamps could possibly become a widespread phenomenon and that some of the postage stamps they may have could rake in a lot of serious money.

The World of Philately